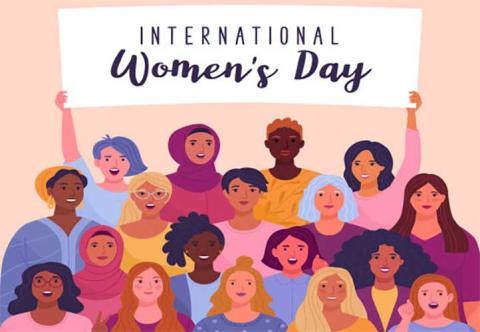 International Women’s Day (IWD) is being celebrated all over the globe on March 8 every year. Theme of IWD-2022 is Break the Bias. Bias, whether deliberate or unconscious, makes it difficult for women to move ahead. It is not enough to recognize bias; action is required to level the playing field. Countries need to devise policies to end the bias so that women can prosper in different walks of life. There are statistics that show bias against women is extremely real. Governments are delivering; outcomes for women not so much. This has prompted demands for renaming IWD to International Do-More-Work-For-Free Day.

Women are venerated and revered world wide for their multi-tasking role as mother, wife, sister, and daughter and as homemaker. They have formative effects in shaping human development in all walks of life. As mother they are divine, on much higher pedestal than men. Yet they continue to be discriminated against all through their lives under the perennial patriarchy and misogyny, commoditized, objectified and looked down upon with violence galore. Despite all such discriminations, women have made all round strides in all fields of human endeavor. Governments all across the world have empowered women by sensitizing all spheres of public administration like education, civil administration, police, judiciary, and armed forces towards gender equality. Still, discrimination against them continues. In India, 39 laws have been enacted during the last over two centuries to empower women to make them equal partners of men in the all round progress of the nation.

It is also true that partners and family members murder about 50,000 women every year globally. Laws are a message to women that they matter. They are murdered at the hands of some one they know, possibly trust, and probably love or have loved. Women have ambitions. It’s policy makers and employers that lack it. IWD is a calendar date to celebrate women or promote women’s issues. It features, promotes and celebrates women. Women do not need a pedestal for a single day; they need equality, all the time.

According to UN Secretary General, IWD is a pivotal moment for women’s rights. Last year (2021), IWD was the largest international event on the social media. Interest and fanfare around IWD have ballooned in recent years without any meaningful change. Women, to break the barriers to gender equality, have to go miles. IWD attracts much attention but it does not amount to substantive change. Platitudes do not help gender equality. IWD is a day of reflection rather than celebration.

Some actions that should be taken to further the women like Raise Your Voice, Support Each Other, Human Rights are Women’s Rights so Know Your Rights, Educate Your Next Generation, Establish a High-level Corporate Team Dedicated to Gender Equality at Work, beat every one fairly, respecting and encouraging non-discrimination and human rights. According to a new global data, at the start of the pandemic induced lockdown, 56 per cent women, who previously worked, are unemployed. Twenty one per cent lost jobs entirely. As lockdown ended, women returned to economic activity at a substantially slower rate than men.

Coming to India, a latest survey report by a US based think tank Pew Research Centre says, “Indians accept women as political leaders, but many favour traditional gender roles in family life.” Report says further, most Indians, regardless of gender, think a wife must obey her husband. However, a disturbing consensus in traditional home settings points out that a woman must obey her husband. Eighty-nine per cent of men interviewed held such view. So did 86 per cent of women surveyed across the country. Women and men, however, differed in their perceptions of traditional divisions of household labour. Only 24 per cent female respondents said women should be the primary care givers to children against 35 per cent men.

In economic spheres, the Pew report says, 79 per cent Indians (82 per cent of men surveyed and 77 per cent of women surveyed) “completely” or “mostly”agreed that men should get precedence over women when jobs are scarce. Fewer than a quarter of Indian adults (23 per cent) said, there was a lot of discrimination against women. This perception did not differ with age group, education level, caste and religion of respondents.

Pew report revealed that gender equality remains a pipe dream in Indian politics despite women forming half the country’s voter base. Women made up just 14 per cent of all people elected to the Lok Sabha (House of the People) in 2019. Political parties field women on a handful of seats in any elections. There are various reasons for women’s poor engagementincluding stereotyped obligations like managing household chores, traditionally assigned to women, and a disproportionate burden of family care. However, Indians in the Pew survey showed a strong tendency to accept women as political leaders, with a majority (55 per cent) either saying that women and men making equally good political leaders or that women can make better leaders than men (14 per cent). However, youth, college graduates, more likely see women as equal to men in politics.

India has long way to go to provide safety to women as one in four, irrespective of their education levels and age difference, still holds the view that women should behave to protect themselves putting the onus of crimes on women, the report finds. Yet, 75 per cent of Indians believe violence against women is a big problem and the silver lining is that about half of Indians think boys should be taught to respect women. Every second Indian said teaching boys to respect women is the way to make them safer. And that is the way forward!