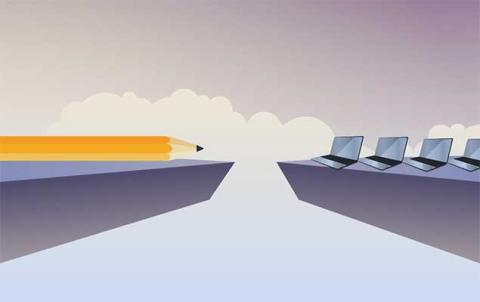 Gulf between those who have ready access to computing devices and Internet, and those who do not have, is generally known as digital divide. There is a digital divide between rich and poor in terms of use of computers. Digital divide denies half the world’s citizens access to digital education, work and participation in modern life. Without Internet access, people in vulnerable situations are suffering throughout pandemic driven school and work closures. Stable internet access also makes up-to-date information regarding Covid-19 pandemic consistently attainable, such as crucial information regarding regional infection rates, locations of testing centres, hospitals, urgent care hours, vaccine centres and other related matters. India has witnessed further widening of digital divide caused by the Covid-19 pandemic.

It is learnt officially that India, as on date, has the second largest Internet user base in the world with over 630 million (60.30 crore) subscribers. It also has the lowest mobile data prices offered anywhere. Despite this, for every Indian citizen with Internet subscription, there is a citizen in rural areas who lacks one. Considering 70 per cent population lives in rural areas, there is a sizeable population living in regions where Internet access is minimal. Marginalised and vulnerable communities living in poverty could benefit the most from the connectivity and opportunities digital technology provides. By closing the gap in digital access between rural and urban communities in India, the nation will develop and progress more efficiently as a whole.

Digital access is an equalizer. Digital inclusion is essential to a strong recovery from the pandemic. As nations recover from the pandemic, the new normal becomes more digital than ever. In the absence of  stable Internet connectivity, life is put on standby. As a result, such people fall behind as society resumes life online. Prior to the pandemic, there was pre-existing digital divide in the country. Only 23.8 per cent of households had access to the Internet. Besides, there is a wide divide in access between urban and rural households. Of the 70 per cent of rural population, only 14.9 per cent have Internet access compared to 42 per cent of urban households.

Digital divide also contributes to social gender inequality with 36 per cent of country’s males having mobile Internet access compared to only 16 per cent females. Such gender digital inequality leads to dependence of women financially on their spouses. People living, mostly tribals, in sparsely populated Himalayas and deserts of Rajasthan face higher levels of digital exclusion. They feel marginalized from rest of the country. Lack of Internet deepens several other participations across facets of our society. When we address the digital divide and bridge the gap altogether many other issues will get resolved.

Digital divide has deepened the gap in educational attainment. India has the largest students in the world with more than 315 million (31.5 crore) students. Digital divide leaves the country far behind in attaining education equally for all students during pandemic driven school closure. Covid-19 outbreak has exposed and expanded digital divide between private and government educational institutions. Private institutes had less problems in transitioning to online learning unlike government schools. Students in government schools face inconsistent electricity, poor Internet connection. Poor students also face inhospitable housing conditions that prohibit online learning. Digital connectivity is more necessary than ever before in guaranteeing that students can sustain their studies, while schools remain physically closed.

In view of the foregoing, it has become necessary to bridge the gap between digital divide for equitable education for all. For this, increased financial stimulus to allow greater access to online resources for children who may not have any computing device and Internet connectivity is need of the time. Additionally, teaching computer science and mathematics in schools to increase digital literacy, expanding broadband connectivity to rural areas, increasing funding for already existing programmes, such as the Digital India Projects. Union government’s attention is also drawn to indispensability to Internet access, which is crucial for all round development. Ensuring uninterrupted Internet service for more of the population will help recovery from coronavirus, take education and national development forward while ensuring country’s most vulnerable population are not left behind.
Some other solution to the digital divide could be to increase affordability, empowering users, improving the online content, Internet infrastructure development and addressing the gender gap in accessing Internet. For this, the Government of India is called upon to fast track Bharat Net project to provide optic fiber connectivity across the country ensuring affordability to all citizens to achieve minimizing inequality in accessibility to reach the Constitutional goal of Equality, Justice, Liberty, Fraternity and Fair-play for all people equally and alike!